Yesterday I re watched the new (ish) star wars film that came out this time last year and i have to say i was overly impressed and i had forgotten how good it actually was. Obviously they do not have the old cast at their disposal due to age and other problems but the brief cameo from Mark Hammil (Luke) was great and Harrison Ford was great in this and so was Carrie Fisher and it felt like a real passing of the torch to this new cast of actors who will carry the franchise for the final three films. I thought that John Boyega, Oscar Isaac, Adam Driver and Daisy Ridley produced very good showings and i have a lot of faith that they will become the new stars and carry the franchise. There are some great moments in this film such as the lightsaber fight at the end and many more, but for me the best part of this movie was the scene between Han Solo and his son, i wont spoil it but its great.
Posted by HarryRicca at 04:17 No comments: 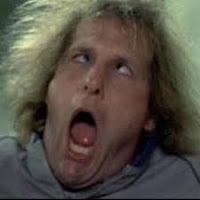 Last night i watched this film for what could possibly be the 9000th time, it is quite simply brilliant. It is so basic but it hits the ball out of the park with the comedy. Jim Carey and Jeff Daniels are absolutely hilarious and i love it. The film is about these two friends who are at the lowest of lows, they live in a beat up apartment and have both been fired from their 'jobs', they were trying to save up money to open their own pet shop, but when Lloyd (Jim carrey) accidentally lands on a goldmine of cash their lives turn upside down, they travel all the way across the states to return the briefcase but that gets them in all sorts of trouble with these bad guys. The film uses a blend of cheap comedy and terrific story telling to create an absolute classic. There are some classic one liners in this film, for example when Lloyd is driving Mary to the airport and he says "why you going to the airport? Flying somewhere?", It is brilliant. I would give this film a solid 9/10 and i recommend it to anyone who loves a good comedy film.
Posted by HarryRicca at 02:42 No comments: 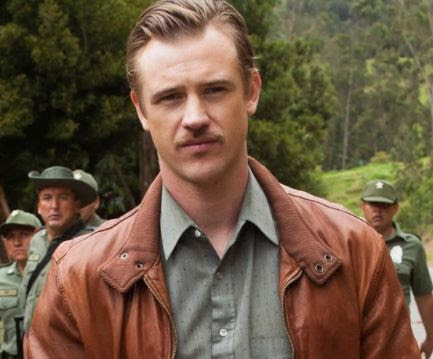 Over the past week i have been watching the Netflix original series 'narcos' and i cannot recommend it any more, this is quite simply the best series i have ever seen. What makes it so good? Well im about to tell you. There are a few different aspects to narcos that makes it so good, for example the characters. There are three main characters the notorious Pablo Escobar and the DEA agents Steve Murphy and Javier Pena. What i like about these characters is that they develop throughout the series, for example Pablo starts out as a normal Colombian guy but he realises the prices of cocaine dealing and he becomes a millionaire, but his character develops into this paranoid drug dealer and you can imagine how that ends out for him. Also Steve Murphy is a brilliant character because he gets transferred to Colombia to help track down Pablo and overtime he becomes very agitated and becomes very stressed and violent. In my opinion the best character is the lesser main character Murphy's partner Javier Pena. I dont know what it is about him but i found my self more invested in him rather than Steve or Pablo. The character development in this series is what makes it so good, how you see these characters change for the better or worse. The fact that this series is based on a true story and is 90% accurate is ridiculous, there is so much going on and it is so exciting, the fact that the majority of this all happened is insane. The final reason why i love narcos is because of the unpredictability, you will of only just met a character and the next episode they are dead. I wont give any spoilers but there is so shocking deaths that you just didn't expect.
Posted by HarryRicca at 01:43 No comments: